Star Trek has long been known for its technobabble — a quantum fissure ruptures space-time and is sealed by reversing the polarity and emitting a tachyon pulse from the deflector dish — but occasionally, its cast is concerned by dilemmas as low-tech as the equipment used to make the show. This was especially true of TOS, which once pitted Captain James T. Kirk against a slow-moving lizardman:

A cannon fashioned from bamboo, charcoal, sulfur, and diamonds? That's simply not feasible… or is it? The Discovery Channel's cult favorite, Mythbusters, tackles this classic scenario next Monday, December 28, at 9 PM. Here's a preview:

Poor Gorn. The lizardman had only the best of intentions: 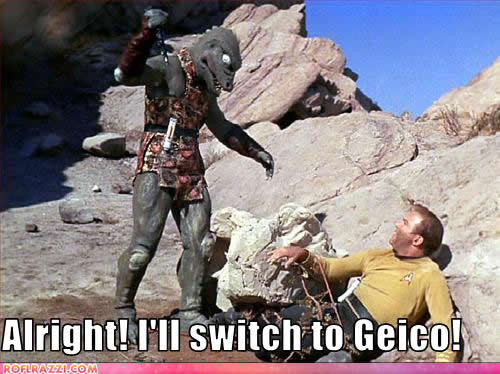 For more of Captain Kirk's ham-fisted battle strategies, check out the independent film, The Kirkie.